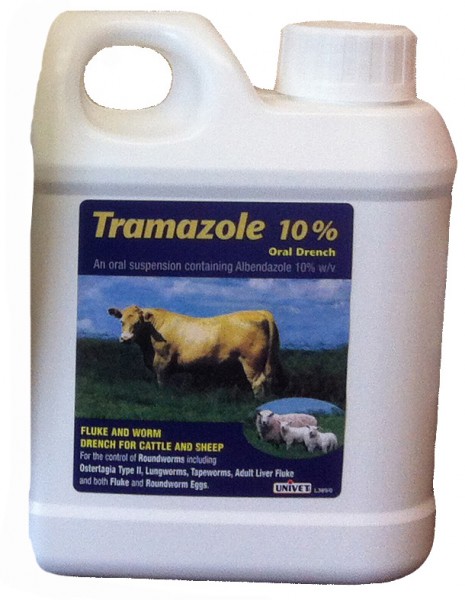 For the control of Roundworm, Lungworms, Tapeworms, Adult Liver Fluke and Fluke and Roundworm Eggs. Tramazole 10% is a broad spectrum multi-purpose anthelmintic containing Albendazole 10% and is used for the control of mature and developing immature forms of gastrointestinal roundworms, lungworms, tapeworms and adult liver fluke in sheep and cattle. Tramazole 10% is also ovicidal against fluke and and roundworm eggs.

In sheep it is active against benzimidazole-susceptible strains of the following species:

In cattle it is active against the following species:

Do not dose ewe at the 'fluke and worm' dose rate, (7.5mg/kg), during tupping or for one month after removing the rams. Care must be taken not to damage the pharyngeal region when dosing, particularly in sheep.Assess bodyweight as accurately as possible before calculating the dosage. Intensive use or misuse of anthelmintics can give rise to resistance.

To reduce this risk, dosing programmes should be discussed with your veterinary surgeon.