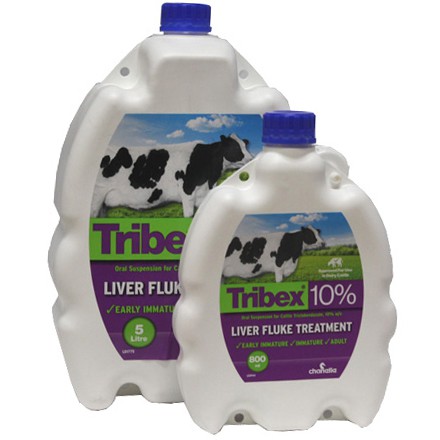 Tribex 10% is an oral drench for cattle that is used for the treatment and control of all three stages of liver fluke, mature, immature and early immature.
Each ml of Tribex 10% contains 100mg triclabendazole.

For oral administration only using properly calibrated dosing equipment. Estimate bodyweight as accurately as possible before calculating the dosage. Shake container before use. The recommended dose rate is 12 mg triclabendazole per kg bodyweight as a single administration which is equivalent to 6.0ml Tribex 10% per 50kg bodyweight. Tribex 10% can be safely given to pregnant cattle. Not for cattle producing milk for human consumption. Heifers - not during last trimester of pregnancy

As a guide, dose all cattle exposed to fluke infected pastures preventatively at regular intervals of 10 weeks from March/April through to October/November. In situations where stock are out-wintered another dose in January may be required. All animals grazing the pasture should be treated at these times. All bought in animals should be dosed before joining the main flock. Veterinary advice should be sought with regard to specific preventative dosing regimes.

Dose all cattle on fluke infected pastures at intervals of 10 weeks throughout the fluke season, usually September to January/February. An additional preventative treatment in Spring will assist in reducing the amount of new infection on the pastures in the following Autumn. All bought in animals should be dosed before joining the main herd.

Where cattle are in-wintered, a single dose of Tribex 10% should be given 2 weeks after housing.

Treatment of sub-acute and acute outbreaks

Affected cattle should be treated immediately after diagnosis and veterinary advice should be sought for subsequent dosing intervals. If a preventative fluke dosing programme is employed the occurrence of acute fluke is greatly reduced. Retreatment may not be carried out within 8 weeks.

Meat and offal: Cattle should not be slaughtered for human consumption within 56 days of the last treatment.

Sign up for our Reward Card Spend & Save with our Rewards card, when you shop in-store or online with Homeland.